Zapatera and Other Mysteries

The motionless, yet seemingly sentient, stone figure peers through the dangling vines and  swaying leaves to get a glimpse of Lake Nicaragua’s sparkling blue body. There used to be more statues on Isla Zapatera, gazing through history with untold stories.

These statues are iconic and some were even dragged all the way to Managua to flank the National Palaces’ center staircase, yet very little is ultimately known about their purpose and meaning.

“The first academic study of the sit suggested the statues might have been used as supports to hold up a thatched roof,” Professor Geoffrey McCafferty explains as he surveys an overgrown rock mound perforated with large trees. “I think this area was ceremonial, but ceremonial is what archeologists call things when they don’t understand what is going on.”

As iconic as the statues are, the children of Nicaragua learn mainly about Spanish history in school. This is in part, due to how little is known of the island and its guardian idols. With further research, many hope to further grasp the depths of their origin.

Mombacho Volcano, as seen from Isla Zapatera, creates a picturesque background for the low-lying Isla El Muerte, home to mysterious petroglyphs. Similar petroglyphs are found on the highest point of Zapatera.

“In the past, the statues did not have any importance because we did not have any knowledge of  what they were, [but] knowing the history, we can also know who they were,” Rene Castillo, a resident for 24 years and a caretaker of Zapatera, says in softly spoken Spanish. “So today, in the schools and universities, history is going to be known because of us as well.”

Castillo is proud of his role in uncovering this history and only resents the removal of the statues because of the collateral damage done by travel.

“If it was decided to move the statues once again from here to there, many would be destroyed, this is why there are replicas here,” He says. 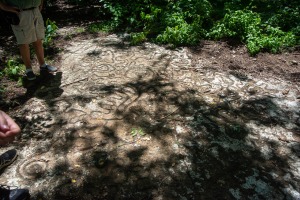 One of the most chaotic of Isla Muerte’s petroglyphs, this collage of abstraction and reductionist imagery prompts talk of licking frogs and a local hallucinogenic flower, floripon.

Other mysteries from Lake Cocibolca’s islands include the petroglyphs on both Zapatera and Isla El Muerte. The cryptic designs range from simple human figures to grand, interwoven, complex and abstract designs covering large swaths of rock.

“There is a plant (floripon) that does this, but the leaves are in a circular position,” Orvin Vallejos says contemplatively after identifying images of flowers, shells and monkeys while crouching over the most chaotic petroglyphs of Isla El Muerte. “When one takes [ingests] floripon, this can elevate the sixth sense. It was a special plant for these people.”

An average Nicaraguan garden is reticent and answers do not definitively grow there.  McCafferty identifies one obstacle that makes the analysis even more difficult.

“I believe that we’re never going to interpret this well, but it is worth a try, because obviously it is something very important to the indigenous peoples,” McCafferty says looking at the roughly worn stone surfaces. “It is a shame the state could not save this.” 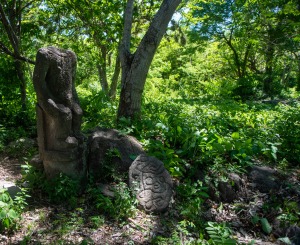 One of the last remaining original statues of Zapatera and a petroglyph sit near a sweeping vista of Mombacho and Isla El Muerte. The headless statue has lost its fellow stone comrades, but it still has a view.

Vallejos also thinks petroglyphs may have served as a map based on research he has read about them, and is weary of focusing all his interest on one aspect, such as ethnographical work on floripon.

“The best interpretation will include everything together,” he said, lost in thought on the swirly images of monkeys, shells and flowers.

On Zapatera Island, Castillo hopes to delve deeper and to better understand the statues and petroglyphs, although it will take a great amount of interdisciplinary collaboration.

“[Local Nicaraguans] have an internal understanding of everything that is here, that exists, what has existed and what does not,” Castillos says gazing at the mountain-like clouds floating over the lake. “[The professors] have a scientific knowledge, [and] we have also studied here with many professors and have participated in many projects.”

This is Castillo’s claim to archeological knowledge of the area and he hopes to develop more in between wandering and cutting along the path of Zapatera’s pre-Columbian residents.