What Did IFR Students Find This Year?

“This bearded male figure head made of faience (a kind of glass derivative), with a decorated headband and distinct coiffure, is being held for display by the student who uncovered it at Abel Beth Maacah. It was found in a room inside a large citadel dating to the Iron Age IIA (9th century BCE) and seems to represent an elite figure, perhaps even a king. Building off this hypothesis, we might suggest that this head depicts King Ahab the Israelite or King Hazael the Aramean, contemporary friends and foes who occupied this region at that time.” – Dr. Nava Panitz-Cohen, Field School Director? 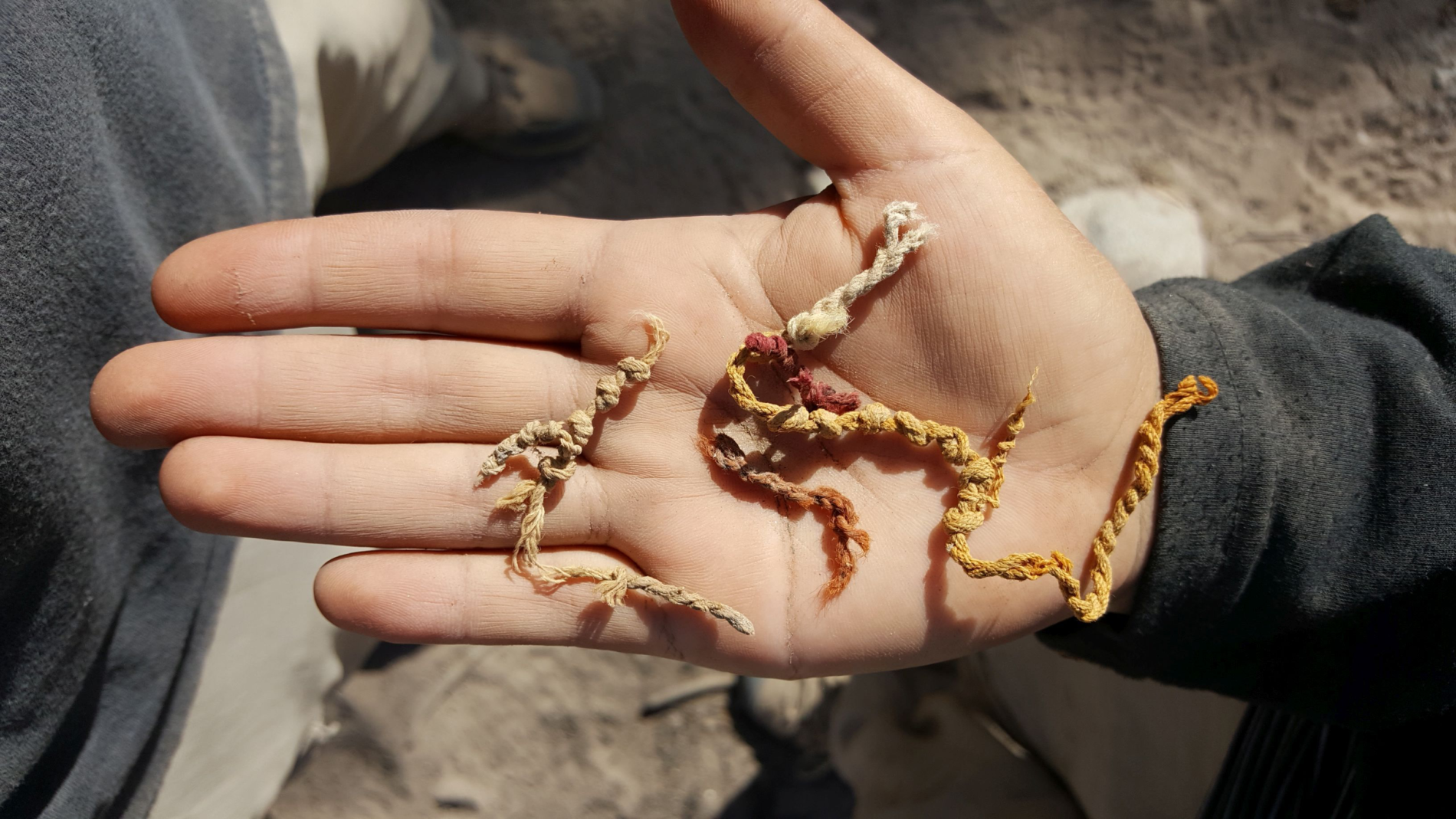 A Muted Message from the Andean Past: It was another hot day at the excavation of the Corral Redondo shrine in the Peruvian Andes. At first it looked like someone’s torn shoelaces. On closer inspection, it turned out that these colored and knotted strings are the fragments of a khipu, a complex record-keeping device used by the Wari and Inka cultures to store statistical, administrative, and narrative information. While scholars have been struggling for decades to decipher their intricate code, only recently were khipus justly recognized as bona fide sources for historical reconstructions. As our team order valium online members huddled around the rare find, we could only speculate as to the message encoded within. Were the yellow strings the count of the harvested corn ears, or were they a list of the numerous gold mines that still dot this valley today? The answer may lie in the other fragments still buried within the site, as with our willingness to accept that Prehispanic Andean civilizations were, indeed, literate. ? 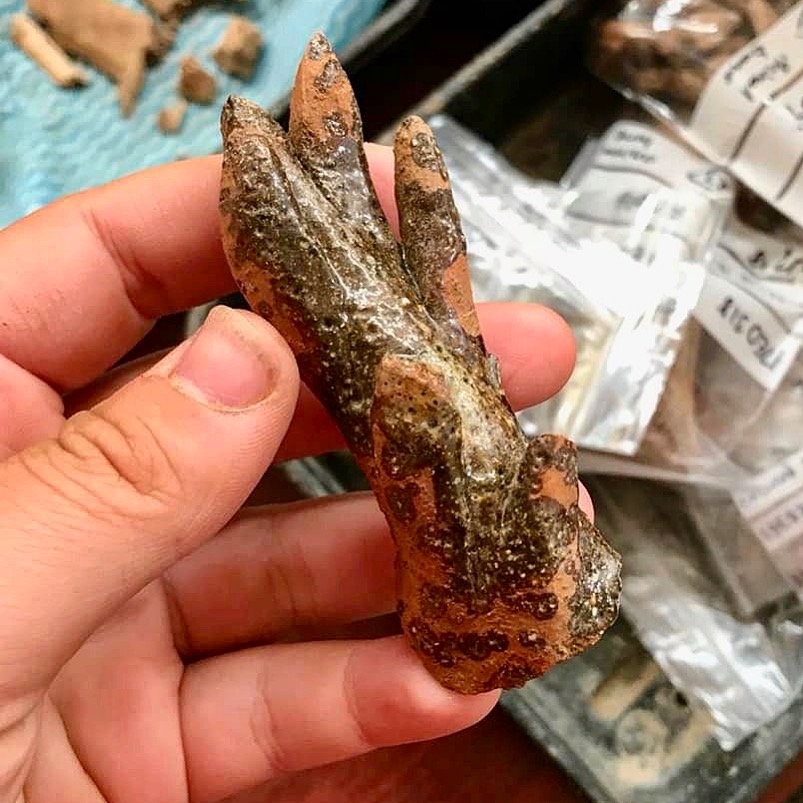 “Our favourite find from the season is a set of ceramic antlers, which speak so much of the Carrick site. Consistent with the shape of a fallow stag, the antlers are from an aquamanile (aqua + manus = water + hand) – a medieval water jug, typically adopting the form of animal or human figures. These jugs usually contained water for washing hands over a basin, either as part of upper-class feasts or for the Eucharist. Most surviving examples are made of metal but, rarely, ceramic examples are found. Our find is particularly significant because the jug is associated with higher status sites and it speaks to Carrick’s Deer Park. Deer Parks are thought to date predominantly from 1250-1300 A.D. The park at Carrick was likely one of the first in the country, and certainly one of the earliest where fallow deer, a Norman introduction, are recorded” 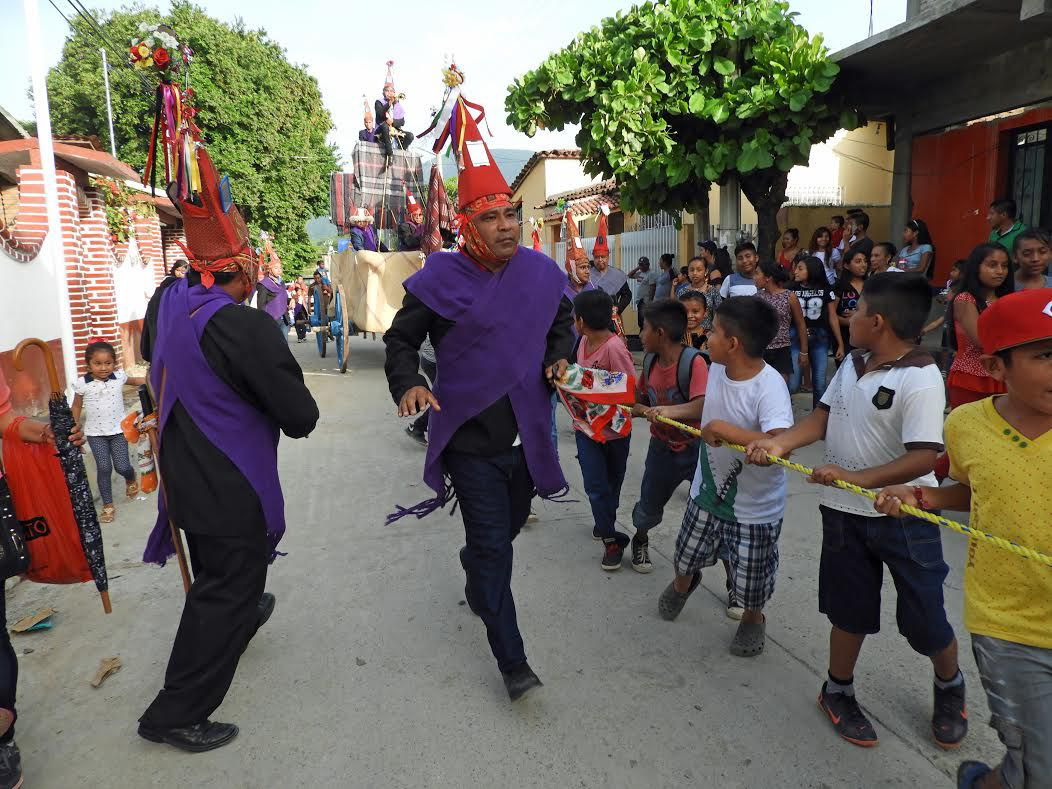 “Indigenous Pirates:For several years now the Mexico-Pacific Rim team members have been conducting an ethnographic research on the Huamelula Indigenous festivity—a ritualized performance of long-term colonial processes on the Pacific Coast. In 2018 we focused our attention on the historical narrative of the ‘pirates’. In this particular reenactment, one of these pirate impersonators is directing a group of kids as they pull the ‘pirate ship’ (actually an ox cart with colorful blankets) along the main village road. At the helm is no other than the Turkish ‘King Muhammad’. Confused? So are we. Considering that this (true) story took 500 years to unfold, it may take us a few more to fully understand it!”

“During excavation this year, we found a complete jar brimming with animal knuckle bones called “astragali” from the 9th century BCE. When counted, it turned out there were 425 of them inside the jar! Such bones are known to have been used either as game pieces or for cultic divination in antiquity. The Biblical text (2 Samuel 20) talks of a “Wise Woman” who prophesied at Abel Beth Maacah. Could this pot with the hundreds of bones be related to her mission? Initial examination of the bones show they belonged to sheep, goat, and deer but not pigs or cows. Are the bones situated in the jar by chance, or does it have cultural or religious meaning?” 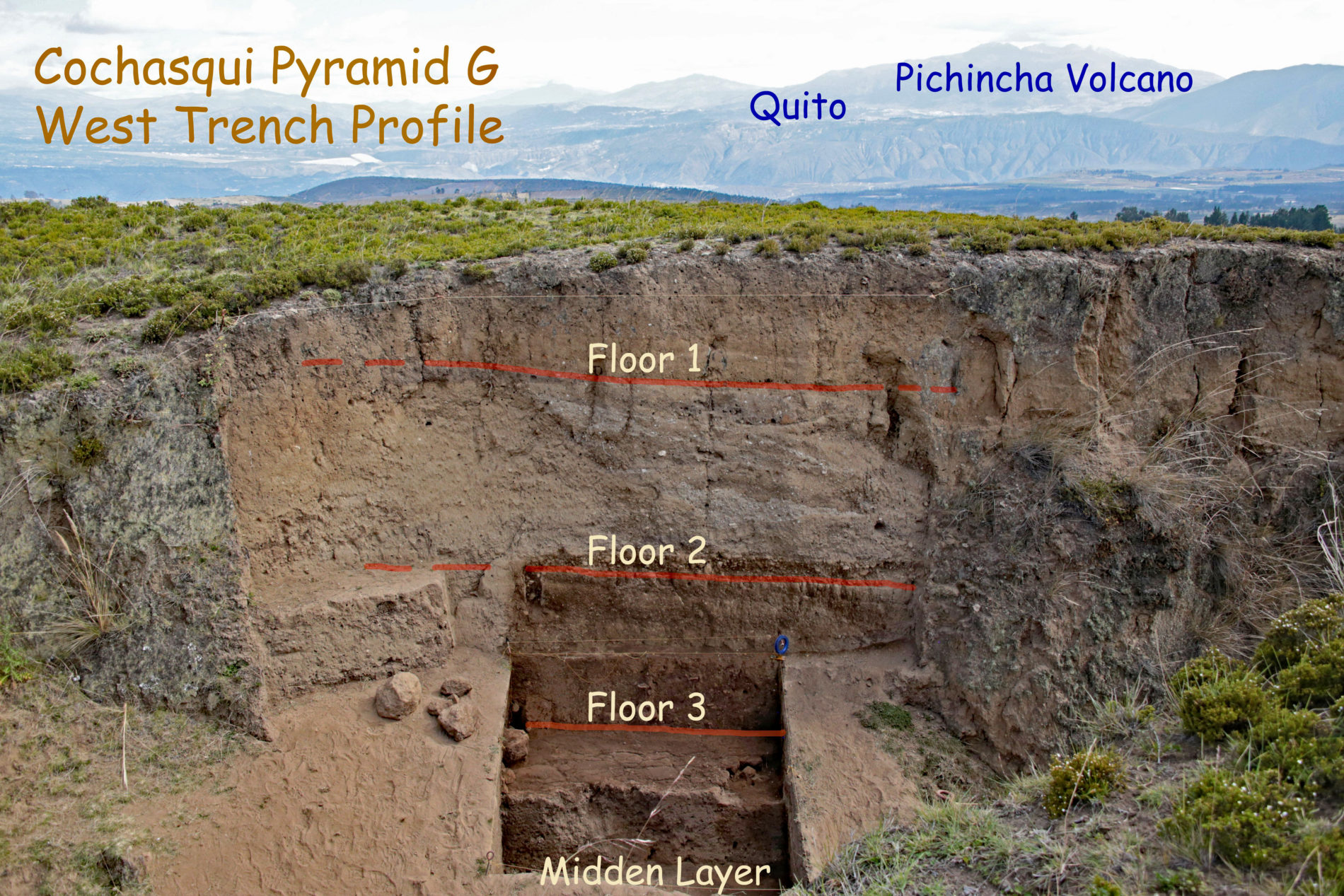 Atop the large, earthen pyramids at the monumental center of Cochasquí (founded AD 1000) stood large circular buildings, each with similar internal features and design. Our investigations suggest they were ritual structures – gathering places for feasting or religious observances. We hypothesize that the pyramids were constructed in stages, each of which may have featured ceremonial structures on their upper platform surfaces.

The find of the 2018 season occurred while working on the profile of a deep looter’s trench on the west side of Pyramid G, the largest at the site.  On the last day of the 2018 excavations, project co-director Will Pratt was documenting an unusual dark midden soil layer more than 4 meters below the pyramid’s surface, when a line of rocks appeared below the layer. It was the top of a meter-wide fragment of retaining wall made of cut blocks of an indurated volcanic ash, a common local construction material. The deep west trench profile had already revealed two intentionally prepared clay floors buried at about 2.3 and 3.6 meters below the pyramid’s top. At 5 meters depth within the fill of Pyramid G, the retaining wall, the overlying midden and the various prepared floor levels above add strong support to our initial hypothesis that the pyramids may have had a much more complex history than previously understood. We suspect the wall is part of a ritual structure given its location. 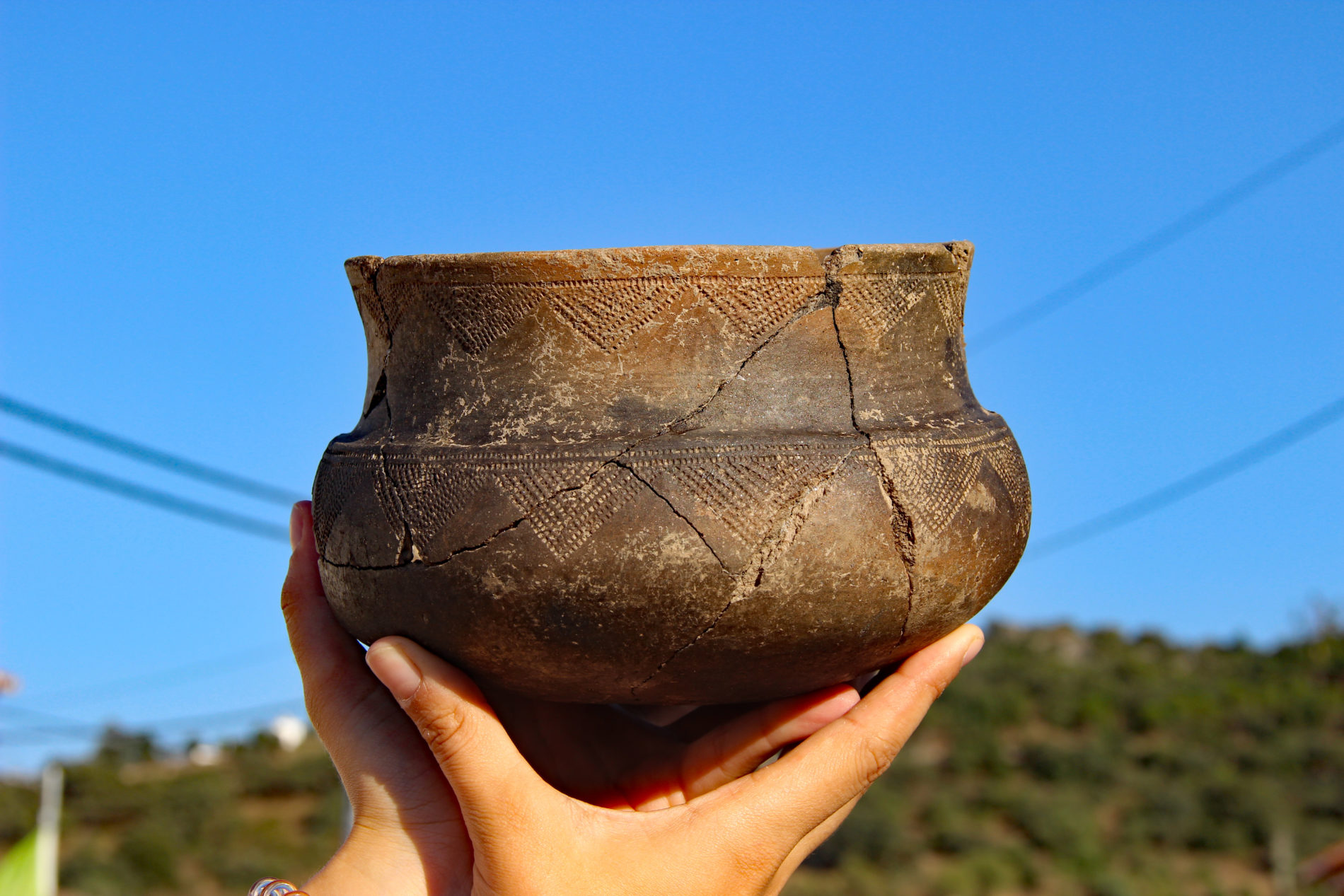 Our top find from 2018 was a Bell Beaker carenated bowl decorated with a geometric, combed impressed style, probably representing an import / influence from Portuguese coastal areas. It is dated from the late 3rd millennium BC (last quarter of the millennium) and represents the integration of Perdigões in a wide interaction network of exotic and valued materials.