Walking With the Goddess

The goddess arrived with a fanfare of brass horns and drums. Her palanquin, held aloft by her devotees and bedecked with ornaments and other ceremonial objects, was carried into the temple courtyard on a special occasion: a visit to her sister goddess. But what began as a planned ceremony quickly transformed into an event guided by the whims of the goddess herself. 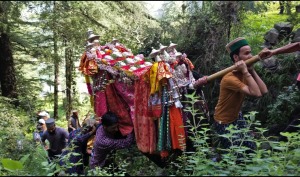 What started off as a normal day in the India: Himalayan Myths and Reality field school quickly turned into an occasion rife with excitement and surprises. While our program’s itinerary was packed with adventure and research, it was this unexpected incident that I count among the most memorable experiences of my time in the field school.

We began, as we did most days, by conducting research at the local temples. We spent many mornings like this, analyzing ancient temple structures and the beautiful motifs carved into their stone. We talked with locals and devotees and learned about their practices and traditions, as well as the lore of the temples. Through their stories and lessons, they explained an incredibly interconnected network of spiritual sites, a network strengthened by the movement of the deities themselves.

After the morning passed, it was almost time to break for lunch. But we decided to hold out a while longer when our director learned that a local goddess, Ugratara, would be visiting her sister’s temple where we were conducting research.

Ugratara—represented by a mask of hammered brass—arrived on her palanquin surrounded by her musicians, her priests, and her gur (a man through which she speaks by possessing him). Few others had followed her procession. We stood by and watched as the ceremony unfolded. Her palanquin-bearers spun her around as she swayed; a kind of dance to mark the occasion of her visit. But as things winded down, something happened that took everyone by surprise, including her priests.

Ugratara’s gur entered an energetic trance. His possession, like her nature, was fierce and ferocious. The small crowd and the musicians all fell silent as the words of the goddess filled the temple courtyard through the mouth of her gur. She demanded to be taken to the temple of Krishna higher up the mountain.

And so, her procession departed to ascend the forested slopes of the mountain. Drawn by the fervor and unexpectedness of what was happening, we decided to postpone heading back for lunch and followed Ugratara instead. It was a decision we did not come to regret, as the goddess’s waywardness turned out to be far more impactful than we could have imagined. 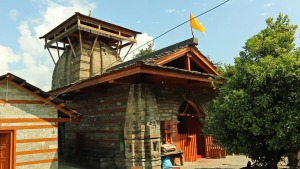 As we climbed the mountain, people flocked to Ugratara’s procession, which quickly swelled to a crowd of hundreds. There was a surreal quality to it, a kind of electricity to the whole event. People dropped whatever they were doing to follow the goddess as she passed by their shops and homes.

When we arrived at Krishna’s temple, a structure of beautifully intricate stonework, Ugratara was carried into the courtyard to bid him a greeting. There, she possessed her gur again. People flooded into the temple space seeking answers, favors, and wisdom from the goddess. And she gave it to them through the gur’s voice.

But Ugratara didn’t stop there. We were soon on our way again, following the goddess as she led the way to the next temple, the procession only growing 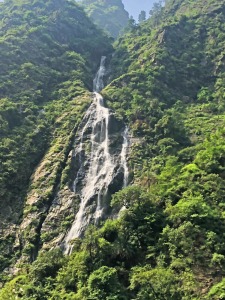 larger. She would end up visiting several more temples that day, confirming something we had been realizing throughout the field school: that the gods and goddesses of the Kullu Valley and their worshippers, are all entwined in a network of deep interaction. Deities and devotees alike walk through the streets and mountain paths, inhabiting the same spaces.

The sacred and the profane exist side by side in the Valley of the Gods. That’s something easily noticed when you’re walking in a procession of a goddess when vast crowds, music and chanting, the fragrance of pine needles and burning sandalwood, and the green terraces of the Himalayas are all around you.

Studying and researching abroad is always filled with adventure, but it’s these moments—being at the right place at the right time—that are truly extraordinary and unforgettable.