The Gallina Phase: Hillbillies or Hippies?

The Gallina Phase: Hillbillies or Hippies?

Have you ever tried putting together a complex jigsaw puzzle?  You eventually find one piece that doesn’t fit anyplace, put it aside, and work on easier parts of the puzzle,  forgetting about that piece.  Finally, we fit, what is now, the final piece.  Cultural puzzles can follow the same pattern.  With the puzzle we call the Ancestral Puebloans, some pieces fit our view of the culture, and some don’t.  We understand the pieces known as Chaco Canyon and Mesa Verde, the most well-known Southwestern ancestral sites, and we generally see how Salmon Ruins, and Aztec fit.  Other pieces stymie us, and, like the puzzle, we put these aside until we can see where they fit, or, we put the piece in places we think fit.  Gallina (pronounced guy-ee-na) is like that.   The Gallina Phase contributes to our understanding of the culture as a whole, but is researched by only a handful of Southwest archaeologists, and has been treated, in many ways, as the piece Southwestern archaeologists couldn’t fit into the overall puzzle.

The Gallina Phase lasted from AD 1100-1300, 50 years less than the United States has been a country.  Archaeological work presents a convoluted picture of the period, with Frank Hibben, who did some of the first serious work in the region, painting a picture of violence that was never ending, and other archaeologists describing the period as a “backwater” or “ordinary, yet distinct,”[1] leaving a wide variety of interpretations.   Oral traditions tell us that around AD 1100, things were changing in the Puebloan world.  Chaco Canyon was descending into collapse, its people migrating to the Mesa Verde area.  Mesa Verde society was changing, becoming more hierarchical, with fewer people controlling parts of the society.  To avoid this control, some archaeologists construct a model of residents leaving the Four Corners area, in rebellion, migrating to the Gallina Region, developing a counter-culture to the hierarchy in the Four Corners.  Thus, we can determine that the people of the Gallina Phase; (1) Migrated away from areas offering a new, emerging Puebloan lifestyle, (2) Developed dwellings, tools, and pottery different from contemporary Puebloan types, and (3) Sustained this lifestyle for a significant period of time while the remainder of the Puebloan world was undergoing their own societal changes. This writing will examine the differences in Gallina structures, an area of distinct differences from contemporary Puebloan life. 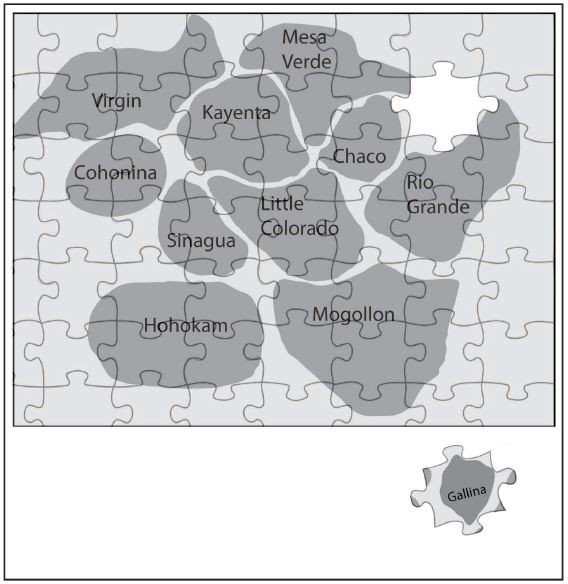 Some of our pieces of American Southwest archaeology may be missing or jammed into the wrong places. Image from Patterns of Resistance (Borck 2012).

Puebloan structures from about 0 AD through 1300 AD change from small one-family pit houses around AD 200-400, to monumental Great Houses starting in the AD 800s, and the cliff dwellings of Mesa Verde AD 925-1125[2].  While Chacoan and Mesa Verde society built large, apartment building-like dwellings, the Gallina structures, built at similar times, may be seen as throwbacks to pit houses built before AD 700 in regions that switched to these large apartment like structures, and in another way, a new development in construction with “unit houses.” During AD 200-400 (Basketmaker II) pit houses[3] were perhaps five meters wide, three meters deep, generally circular, with a packed dirt floor and an interior fireplace, with deflector.  During the Pueblo I Period structure design morphs from single-dwelling pit houses to multi-room communal dwellings.  This “Pueblo” style remains the stable form of Puebloan architecture into the contact era in the 1500s. 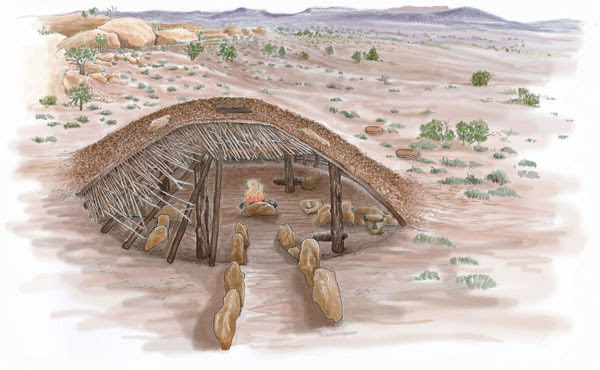 However, Gallina communities break with Puebloan architecture, returning to the pit house style common before AD 700, and constructing single-dwelling surface houses; in both cases, modifying and enlarging these designs, as well as incorporating pit house features into the single room surface structures.  They also stop building kivas and incorporate religious architectural elements of kivas into all of their homes. Combined, these demonstrate a greater investment in the house than we see with other structures in Puebloan areas.  Gallina pit and unit houses are as much as seven to ten meters wide, with interior fireplaces, flagstone floors, and plastered walls, sometimes incorporating wall motifs, possibly indicating the use of the home as a ritual center with individual families, not a hierarchical group, controlling ceremonies[4].

Adobe benches with storage bins and a deflector in front of the fireplace, between it and the ventilator, are expansions from the earlier pit house designs.  The unit houses in particular are fascinating structures, seemingly modeling pit house architecture, something only seen in the Gallina region.  These are square or rectangular adobe and stone structures with features similar to those found in the pit houses; plastered walls, interior fireplace, deflectors, and ventilators, along with possibly ritual murals on some of the walls.  Both the pit houses and the above ground structures are massive in size and scope, and, in the words of Dr. Lewis Borck, “overbuilt” for a single family.[5]  What we do not see in the Gallina area is the Pueblo design, multi-room, apartment buildings, which were common elsewhere, nor do we see dense populations in small regions like Chaco, Mesa Verde, or Aztec.  Concentrated villages are found in areas of the Gallina region, but consist of clusters of single-family dwellings, one to four pit houses, unit houses, or a combination, within an easy 10 minute walk of each other, not the major villages of other Puebloan areas 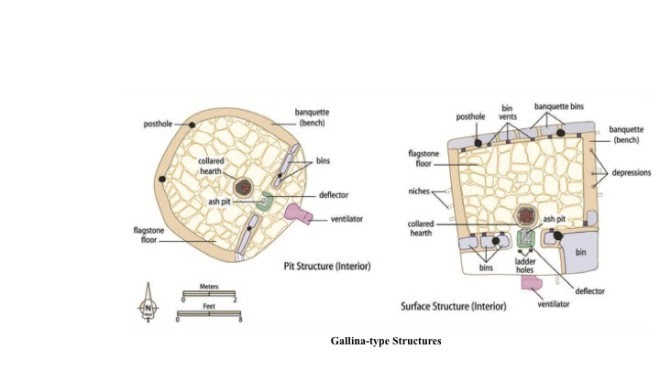 Were architectural changes limited, we could possibly ignore them. However, there are over 2300 of these buildings in a 2,000 km2 area; far too many houses to pass off as a fluke. Also, architectural style changes are only one of a number of modifications seen during the Gallina Phase, including differences in tools and pottery.  So where does the Gallina piece of the puzzle fit?  Perhaps they simply wanted a less constrained way of life, keeping their individual beliefs intact. One of the original counter culture people of the Americas, the original hippies.[6, 7] Regardless of their reasons, ultimately, their distinct way of life faded into conformity as things they rebelled against faded into history. Around AD 1300, with the excesses of Mesa Verde and the great Chacoan experiment gone, the Gallina people likely migrated south and east, probably settling in the Rio Grande and Rio Chama regions of New Mexico, leaving their structures and artifacts as their history.  There lives in the Gallina highlands demonstrate that this was not a marginal area, but a thriving part of Pueblo and local indigenous history, separated, by choice, from the more mainstream Mesa Verde-type societies. While not fully comprehending the reasons for their lifestyle we must admit the Gallina people were 200 years ahead of their neighbors in the Mesa Verde region in rejecting hierarchy. [7]

Check out the field school!