Every pile of dirt poured into the sieve at El Rayo has the potential to change what history books preach. Imported pottery, polychrome pottery associated with incense burners and other pieces thought to be from a much earlier occupation period, and evidence for a structure are some of the things found thus far in a one-square-meter pit. 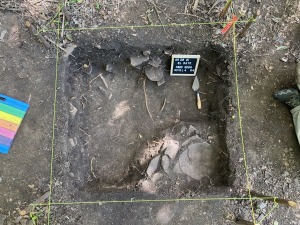 Pit N520, E290 at Locus 3, El Rayo’s Cemetery. A bolstered burial urn rests in the southwest corner. More than ten teeth and remnants of arm bones have been found here, but these finds do not greatly impact our understanding of funerary practices. The pottery sherds are much more interesting and may change prior ideas about these past cultures.

“Every time you stick a trowel in the ground, you could change history,” Geoffrey McCafferty explains while pondering what makes him love archeology.

As two-person teams master their respective square pits, oddities start to appear. Students do not fully understand these anomalies until working in the lab, where they can consult McCafferty while processing finds.

Ceramics have always been a tool for dating in archeology, specifically by studying stylistic trends and their association with certain places and times. Pottery found in one test pit (N520, E290) has changed what those limited dating techniques have suggested.

Multiple pieces of pottery from the Bagaces period have been found in some of the most recent levels of the pit, and remnants of a Bagaces incense  burner were found in association with polychrome pottery.

These associations contradict the theorized dates for the Sapoá and Bagaces period. According to the book McCafferty says the finds are contradicting, since these periods did not coexist.

These associations contradict the theorized dates for the Sapoá and Bagaces period. According to the book McCafferty says the finds are contradicting, since these periods did not coexist.

According to Sharisse McCafferty, an imported, incised sherd with a tapir face also established a connection of trade previously unknown. 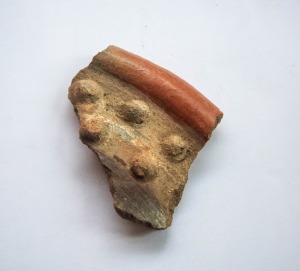 “Finding a piece of pottery that shows that the cemetery is older than previously thought totally changes the narrative of the site and the use of the site,” explains Lachlan Kyle-Robinson, the excavator of test pit N520, E290. “I like the idea of changing the history books, we are actively changing the narrative and it’s changing the collective knowledge.”

A reliance on pottery for dating has led to flawed ideas of chronology. In El Rayo, multiple pottery pieces from supposedly drastically different periods were found in the same archaeological context. Suggesting that pottery is the end all answer to defining cultural periods is problematic.

“Geoff thinks about [pottery periods] as Bagaces, intermediate, and Sapoá as if it was very clear-cut, and I don’t see it that way. I think that makes everything more complex, more fluid,” Ruth Martinez says. Martinez is a Nicaraguan archeologist overseeing excavations at El Rayo and she believes that one should contemplate the validity of relative dating given the complexities revealed through carbon dating.

“To me, these societies have been very complex from the beginning, and I disagree with the kind of archeology [that] archeologists want to make, especially coming from US training, where this ended very clearly and this began very clearly.”

Understanding the complexities of the cultures that inhabited El Rayo will help define what it means to be Nicaraguan.

“Until the 70’s and 80’s, we were still thinking about diffusionism. The way we were thinking about the societies that lived here were measured with, ‘Were we Mayan? Were we Aztec? Were we from South America?,’” Martinez says, describing Nicaraguan archeology and its use of pottery. “I like to think we had the choice to import and then reproduce or reflect on what we got and then make it our own; I really care about what that means for Nicaragua and Nicaraguan archeology.”

Tapir image on pottery sherd suspected to be a result of a long-distance, previously unknown trade route.

McCafferty asserts the relative dating is accurate, and that finding Sapoá pottery in the same context as Bagaces pottery may be due to people keeping heirlooms.

“I always like trying to apply modern day situations. If someone has an heirloom today what are the emotions around it? Because I think those emotions are universal,” Kyle-Robinson says, skeptical of McCafferty’s theory, “If it was important to someone in ancient times, would it not have received more care and attention?”

Oddities in the cemetery also include evidence for walls and posts — a structure. These things will also change how the cemetery is viewed for future research.

Martinez and Kyle-Robinson are both interested specifically in what these recent discoveries mean for Nicaraguan archaeology.

Robison makes “change the history books” a motivational mantra to start out each day excavating in the field. Each thing found ultimately adds to the compiled wealth of data on pre-Columbian Nicaraguans.