How Field School Made Me a Researcher

I’m Julian Gonzalez, a Psychology major and Anthropology minor studying at California State University, Los Angeles. When I expressed to my professor that I was interested in attending a field school, he immediately recommended doing one through the IFR. I was accepted into three programs and was a Vera R. Campbell scholarship recipient. This past summer I attended the Mexico: Oaxaca-Pacific Rim field school. This school focused on linguistics and ethnography, the majority of our work was dedicated to language descriptivism and community-driven work around several of the linguistic regions within Oaxaca.

I became the first person I knew to go to a field school, I had no idea what to expect. I didn’t feel it mattered, I had already made the commitment and had a lot of supporters going into this trip. Once the spring semester ended, I counted the days until my departure. I remember being really anxious about being on my own for those few hours that I’d be flying from Tijuana to Oaxaca City. I met with the director, Dr. Sonnenschein, and one of our TA’s at the airport and got to meet everyone that night at our first team dinner.

Members of the community, in Negritos costume, pose in front of the church steps after welcoming us to their town.

We moved around a lot for this field school, starting in Oaxaca City, and going along the Pacific coast line towards the isthmus and coming full circle. The bulk of our research work happened in the town of San Pedro Huamelula. We were there to document Lowland Chontal, a language variant spoken by only a few people today. We arrived just in time for the Patron Saint’s Day Festival, a time when language and culture are on full display. I was assigned to an ethnographic group. I learned about the importance of the festival and how people, both young and old, are involved. People from the community partake in roles that represent the history of the town. People typically chose a role when they were children or found one in which they feel they best fit into. The negritos, usually the town jokesters, are masked men who had a false princess to offer for marriage; the Turkos, are masked Turkish men who wanted to form a trade relationship with the town; the Mareños, are fishermen from the nearby town San Mateo del Mar, also known as Huaves, who offered their virgin princess for marriage to the mayor of San Pedro Huamelula; the Mulietas, crossdressing men and the sole representation of femininity in the festival wanted to ensure that the married was carried through by both sides; Caballeros, horseback riding men who made a later appearance in the festival.

Town mayor received the Lizard Princess and walks down the main walkway of the town as people make offerings.

In the few days I spent there, I felt so strongly connected to the community. I got to speak with different members of the community both in and out of character roles. They showed us great hospitality and were glad to share anything they could with us about how they prepare for the festival, their festival clothing, and the ways in which they’ve seen the festival change. I recognize the festival as an enactment of relationships, many of which persist to this day.

Because we were there for the festival, there was a lot going on everyday and it definitely made ethnographic work more difficult. But as Dr. Sonnenschein emphasized from the beginning, field work is all about remaining flexible. The festival is an all day contribution and there were small windows of time to be able to pull people aside and speak with them. This forced me to be more comfortable with approaching people for quick interviews. Being in the field you’ll learn to make adjustments on the fly. 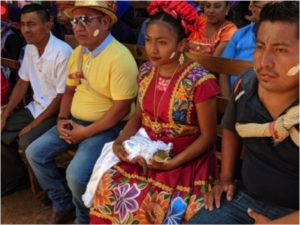 A woman, holding the Lizard Princess, arrives to mass in a dress with members of the Mareño group by her side.

Having had this opportunity to learn about language and conduct my own ethnographic research, I’m more aware of how language and tradition cooperate to construct and maintain identity. I’m still processing what I’ve experienced during this trip. I have learned that flexibility, communication, and openness are important to learning both in the pursuit of research and people skills. I want to be an academic counselor for high school students and I’ll have to be comfortable reaching out to students and parents. This experience showed me that I’m capable of doing intensive research. I’m capable of graduating from university. I’m capable of working in a team. I’m grateful we had such a good team of focused individuals with diverse interests in relation to the subfields of Anthropology. Field work is rigorous, yes, but was impossible not to make friends and have a great time with the people on the team. Being reminded that I’m capable is going to fuel me in everything I set myself to.