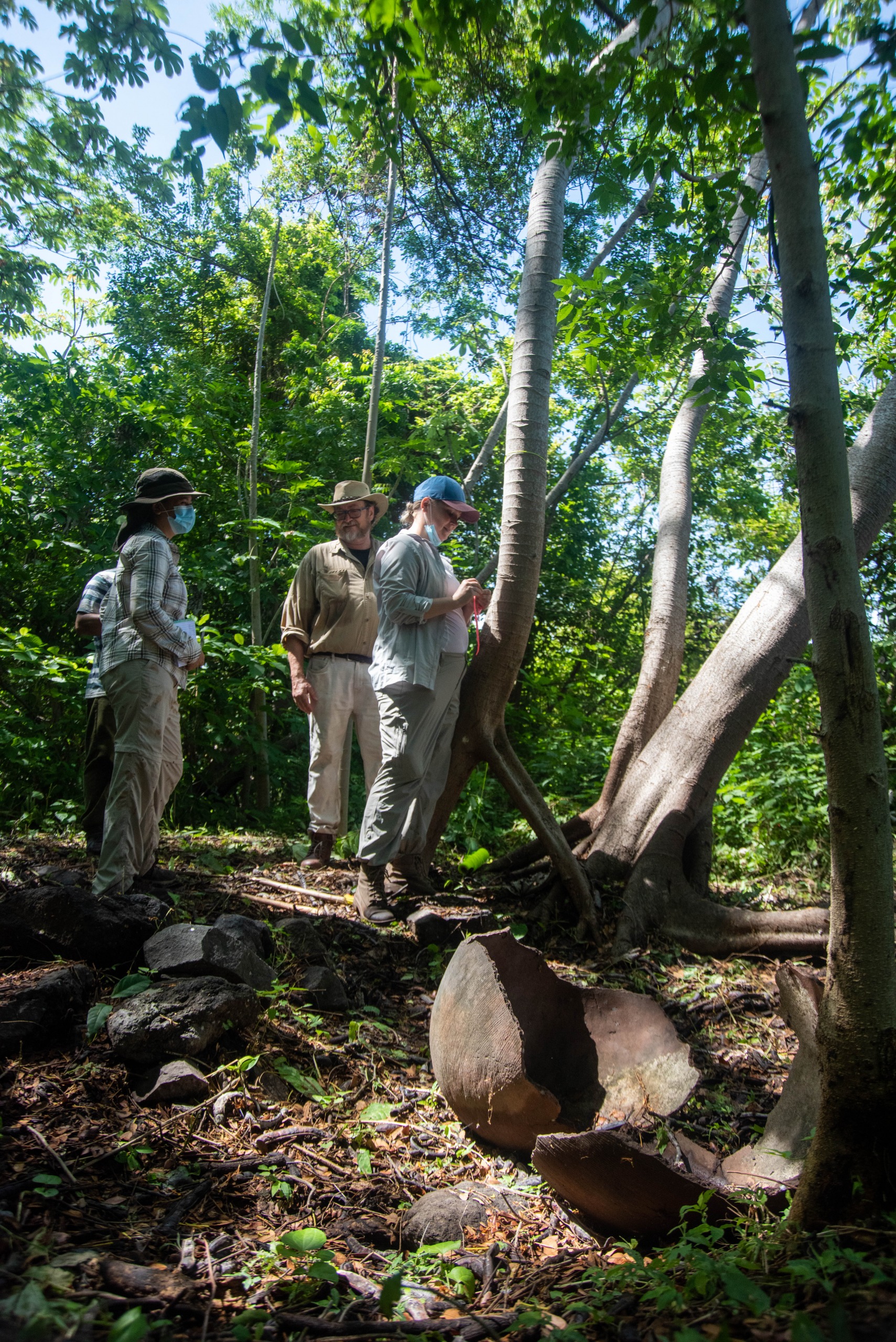 Grid lines being laid out at Locus 3, the cemetery. The cracked urn in the foreground is one of four visible on the surface. These visible artifacts vaguely approximate how large the cemetery is and dictates where test pits should be started.

Insects writhe and scurry among the fallen detritus and lopped leaves litter the overgrown landscape. Banana trees tower above us as we clear some of the sites the McCaffertys previously excavated on the Salablanca family property.

After laying out new grid lines near three burial urns visible on the surface, we first break dirt at Locus 3 in our planned shovel test pit located within a seemingly large burial complex. Burial urns and pottery sherds litter the surface and the four shovel test pits do not disappoint.

Two pits yield teeth and a few bone fragments and all of the pits were filled with a myriad of ceramic pieces. These pieces include a variety of patterns, textures and shapes. One was a zoomorphic face.

This is the first time  many of the students actually uncover an artifact in the field. Such a rich site leads to multiple great first experiences.

“It’s an indescribable feeling. I think it’s something you can picture in your head and you can mentally prepare for,” Lachlan Robinson explains through a constant smile, “but peeling back that layer of dirt with your trowel and seeing that white layer of pottery or that tooth puts you on top of the world. It’s unmatched.”

This is Robinson’s first experience excavating in the field and he realizes many students rarely uncover human remains within the first 8 cm. 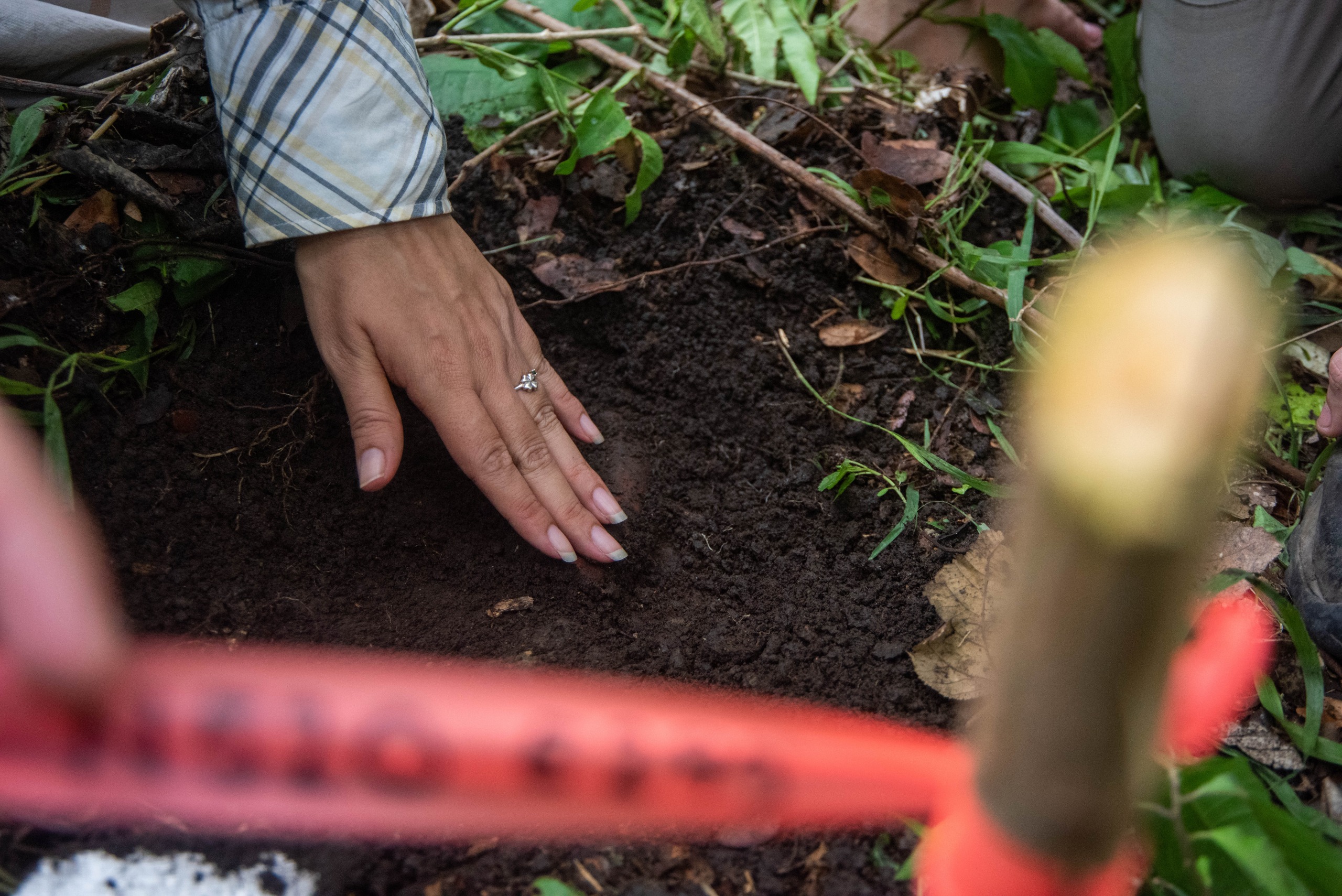 Pottery is gently brushed and exposed after a very quick shovel test at Locus 3.

“You are literally holding a piece of history that hasn’t been touched or seen for over a thousand years. It both connects you to your human past and elevates you. It’s pure bliss.”

After a year of online classes, getting your hands dirty in the field is something many are anticipating.

“Wow, we had found bone,” Robin Goldman exclaims after looking back on her day of field work, “it was small so I didn’t think much of it, but later on I realized I was holding probably a thousand year old piece of bone, and it kinda hit me that this once was a person.”

Robin’s first year of anthropology classes at the University of Michigan was entirely online. “I took two classes about archeology, and since they were online, I wasn’t like ‘this is great, this is so cool’ till I got here and I was actually doing archeology, actually doing what my professors were talking about, and that made it real.” 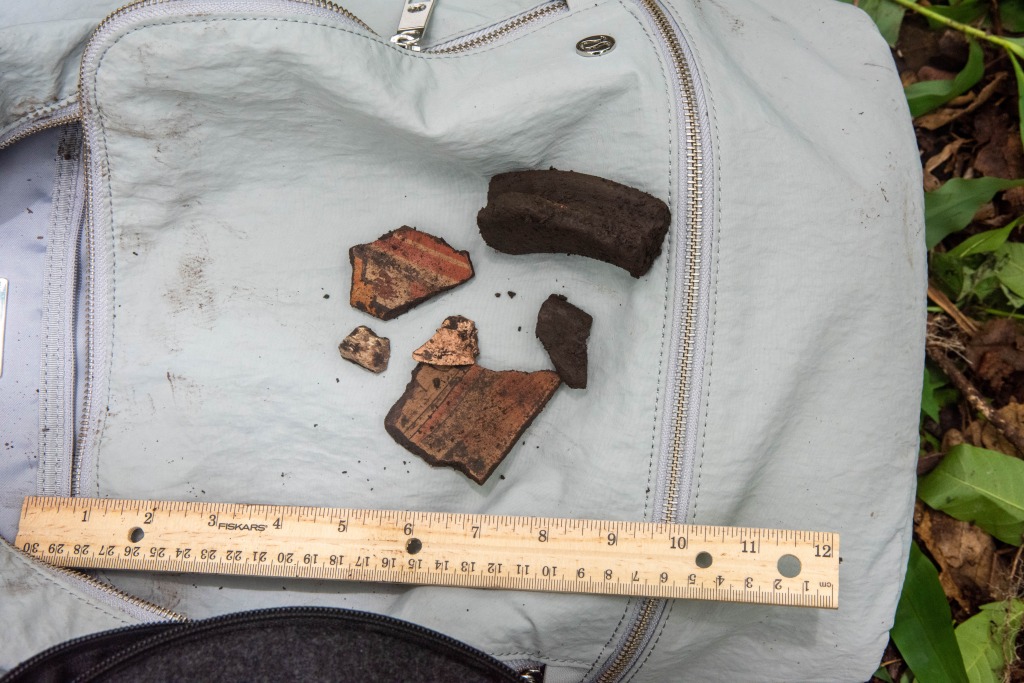 Polychrome pottery sherds and a rim from a shovel test at Locus 3.

El Rayo has yielded an amazing amount of artifacts in the past, and the prospect  of find the perimeters of the graveyard through further excavation is promising. After a year of online classes in a discipline that  usually falls short of properly instructing field practices in the classroom, this will be a very rewarding experience for seeking careers in archaeology.