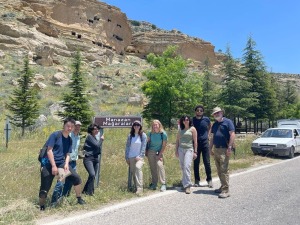 It has been a while, but I have been trying to get acclimated. The first ten days in Karaman, Turkey have been quite the experience.

We are now doing rescue archeology because of previous looting at the site. The archaeology was compromised because a large pit was dug by looters, so the Karaman Museum asked Professor Baird and his team to examine what could be salvaged. This season, we are digging a new trench, which so far has contents from the Neolithic period. 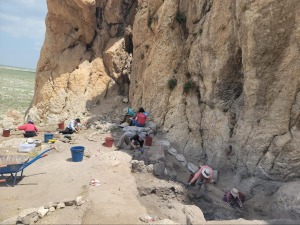 Pınarbaşı was primarily used during the spring and summer seasons due to its access to fresh spring water. In addition, the people wholived there showcased evidence of making clothing, baskets, fuel, and domestication of the local plants. We suspect that they traded their goods for obsidian and shells to produce tools and ornate burial goods. Previous excavations of burials there suggest ritualistic practices were common during the the Epipaleolithic period, and that people may have migrated back to the area to honor their dead. Aside from our fieldwork at the site, we have taken two field trips so far. One was to the cave dwellings, Manazan Mağaraları just outside the area of Karaman about 37 minutes by car from the city of Karaman where we were staying. The other was to a Neo-Hittite site with Byzantine church structures, the Binbirkilise. Both were beautiful and amazing. 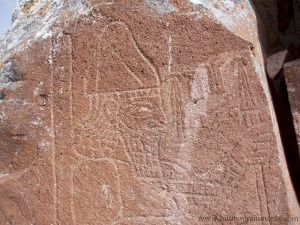 I was lucky enough to see petroglyphson top of a mountain in Kızıldağ, which was a part of the large Karadağ volcano that dominates the land to the south. The Hartapu Monument depicts a large life sized king sitting on his throne holding a staff and bowl! These field trips opened my eyes to the rich history in the area not only as ancient as the Epipalolithic but into much earlier periods like the Bronze age. There is also a rich abundance of Byzantine history and it shows the complexity of the christianity in Central Anatolia before the Ottoman Empire.