A Day in Granada

Geoff McCafferty’s IFR team arrived in Managua and bussed to the colorful, Spanish spired city of Granada. Students were taken around the oldest city in the Americas by horse carriages and  introduced to some of the main sights. The city’s history is dynamic, dramatic and holds engaging  secrets for everybody. Pirates, a volcanic eruption, and a tactical, backstabbing confederate are a  few of the things the grand city has endured since its founding by the Spanish in 1524. Before beginning excavations, the McCaffertys also introduced students to indigenous  artifacts displayed at Mi Museo. These artifacts represent what the group will hopefully excavate  in the field at El Rayo.

“During the tour of Granada, we were told a little more about Henry Morgan’s operations in  Nicaragua. Nicaragua was an extremely advantageous territory for  pirates and Granada in particular, was beneficial due to its central location and value as a Spanish port city. Pirate history, and especially  Morgan’s history due to his infamy as a slave owner and trader with money gained from raids, is crucial to understanding concepts of race and ethnicity within a historical context. Morgan found allies in the Miskito people of Nicaragua. He accomplished this by bargaining with their own hatred of the Spanish and pinning down a common enemy, even thoughMorgan was also an invader in their land. 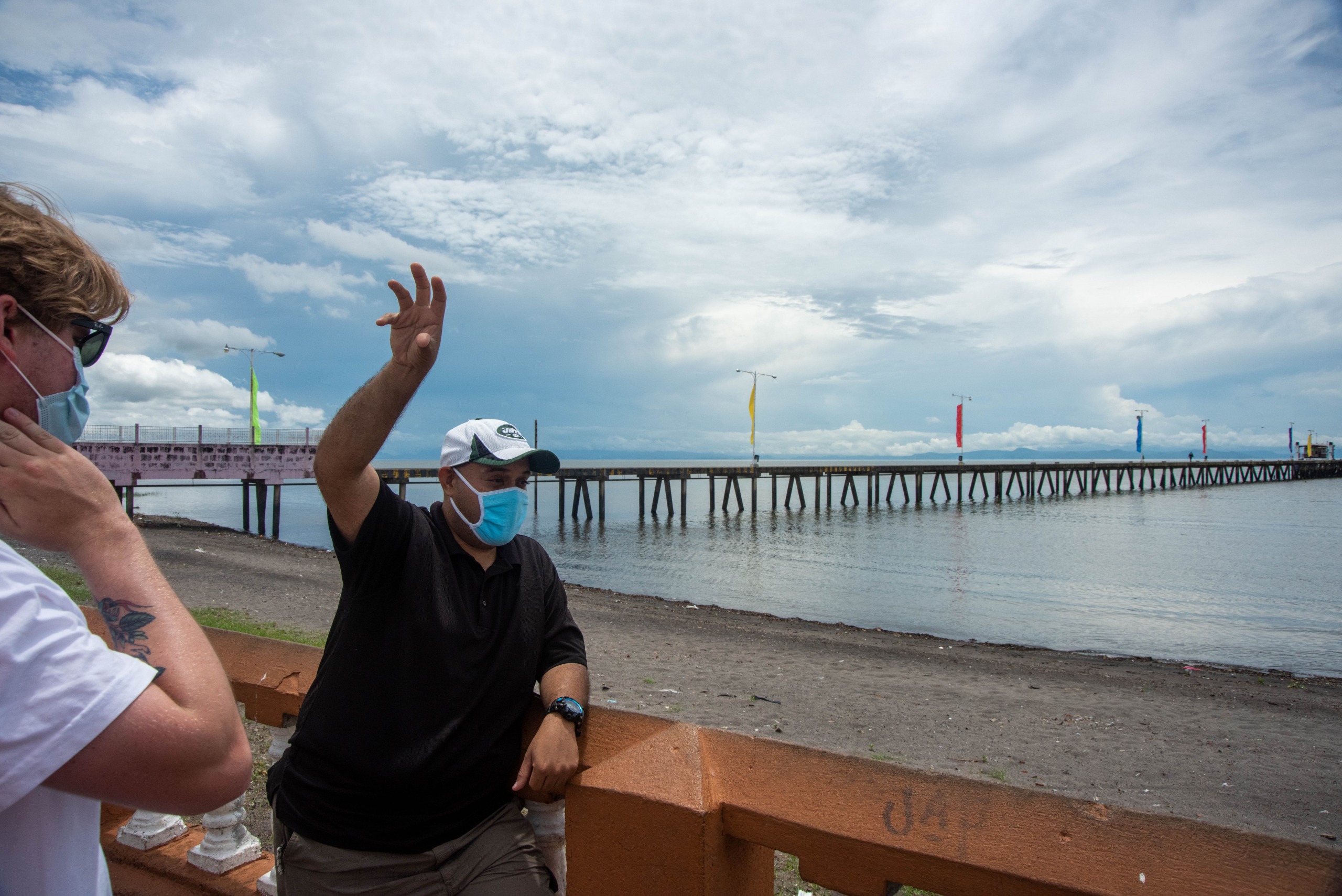 Gustavo Mondragon is a tour guide in Granada and will also be joining the team on the excavation site. The first day, he takes the time to educate us about Granada’s history. This included a visit to Lake Nicaragua, or Cocibolca, which was also a route many pirates used for strategic attacks on the city. One student, Jericho Walter is particularly interested in this sort of history as a subject of research.

Pirates have been romanticized and commercialized to hell and back. Daniel Defoe most likely wrote A General History of the Pyrates, which is almost entirely fictional but presented as fact and heavily influenced  what has now become common knowledge about pirates such as Anne Bonny.

Unpacking the extreme intricacies of pirates as both a class and a culture and looking beyond the fiction is important work. Henry Morgan was not a genius or a charismatic businessman;  rather, he was a man who understood how to exploit already fraught lands and communities. This is truly visible in the history of his raid on Granada — silver was the sought prize as much as proof that a band of canoes sailing up in clear view of armed forts could pull it off.

With that  accomplished, word spread that Morgan would take what he wanted by weaving through webs and exploiting cultural tensions that had been brewing for centuries. In the time where the English and the Spanish and other Europeans were actively fighting for indigenous land, Morgan (before his position as governor) as a former privateer had no alignment except to himself. The lack of national loyalty in piracy is exactly why they were able to accomplish raids such as the Granada one; with no crown to serve, there was nothing that was off limits.”  —Jerry Walter

“Being the oldest city in the Americas comes with its own caveats. During our coach tour of the city, our tour guide, Leslie, points out the La Polvora fortress towards the center of the city. A dark shadow within an otherwise colorful city, the building is stained grey and black as the tiles from the roof crack and crumble towards the edges. Yet it dominates the plaza as a reminder of the cycle of exploitation, corruption, and how neocolonialism continues to transform Granada – and by extension, Nicaragua. 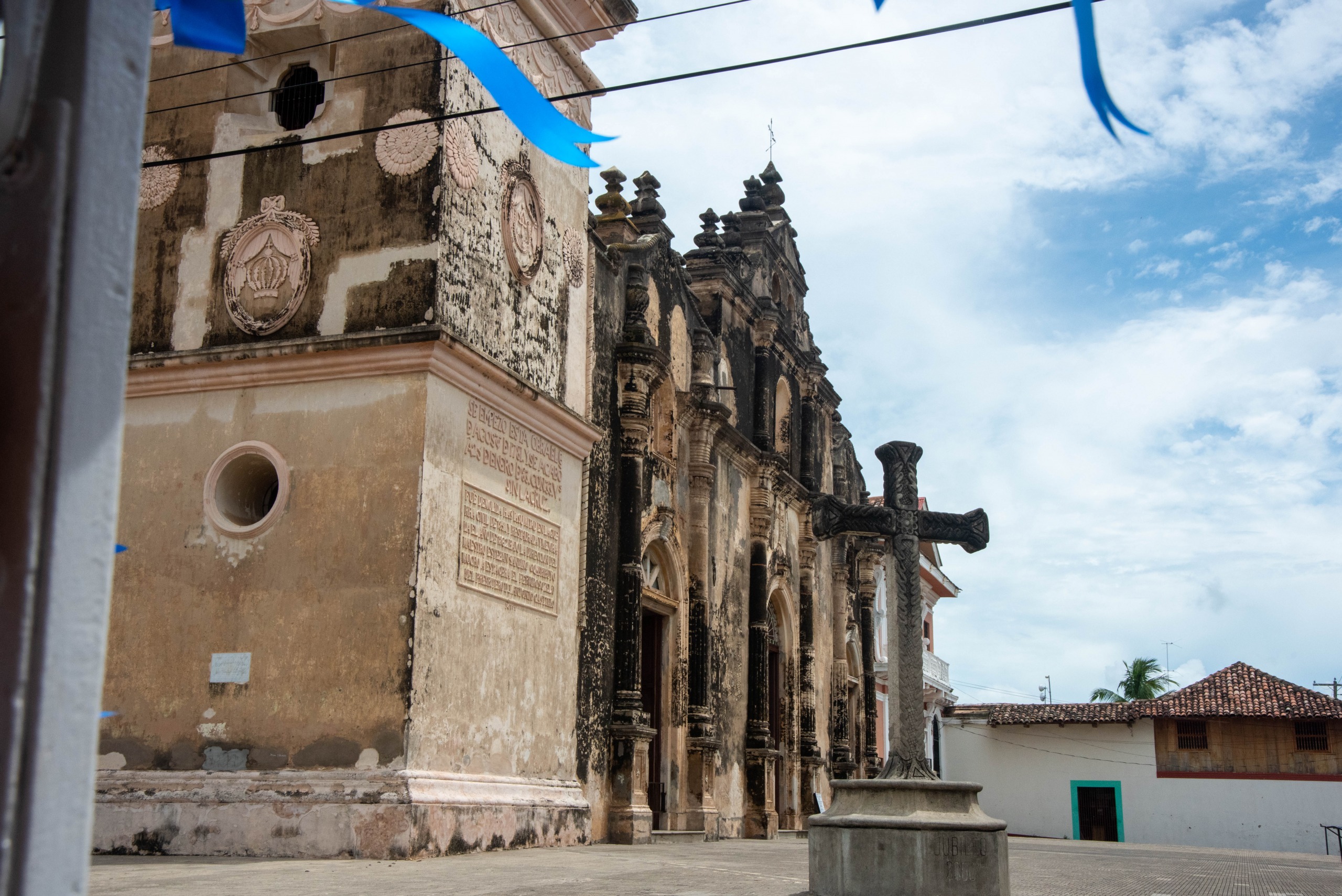 One of the city’s many historical buildings, this church has had many roles. Its purpose began as a defense against pirates, but then it took many strange turns that specifically struck Simone Judea Muhammad.

Initially, La Polvora operated as a Spanish fortress against pirates in the Lake of Nicaragua during the 16th – 17th centuries, firing the now-defunct cannons along Granada’s port that can be found along the lakebed. But Leslie explained how American “adventurer” William Walker took advantage of the Nicaraguan Civil War in 1854, bringing forth an army of mercenaries to invade the country and forcibly host a false election to declare himself governor of the country, utilizing his position to legaliz

e slavery and suppress the nation’s burgeoning democratic processes. And so, the fortress was transformed into a prison for

Walker’s political enemies – AKA those who decried his farcical election and claim to power. Those who protested his tyrannical rule were subjected to torture and subsequent death.

Leslie joked that La Polvora continues to hold the ghosts of those prisoners to this day, but as we  passed under the fortress’s shadow I don’t doubt that spirits still linger within its walls, trapped within one of Granada’s darkest memories. And as Walker set the city ablaze in his retreat from the rising insurgency, the first site of the fire – La Polvora – continues to haunt Granada’s history to this day.

But when Leslie pointed out the mango groves in its square, how he and his friends would sneak inside as childish dares, and how the women continued to find textiles and surviving non- perishables in the fortress, it reminded me of how Nicaragua continues to respond to outside influence in overcoming adversity and taking advantage of the opportunities left behind.” — Simone Judea Muhammad 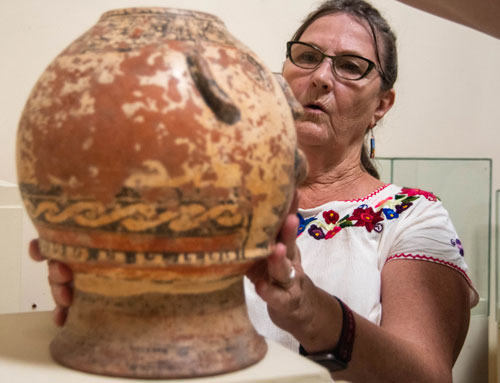 Sharisse McCafferty showed students Mi Museo on the second day in Granada to acquaint us with the ceramics we will likely encounter in the field. McCafferty explained her identification of the praying mantis on many ceramic artifacts, different ceramic period styles, symbols of indigenous individuals and tapirs, and much more. Philip Hutton is particularly interested to see this in the field.

“Ceramics have always been a tool for relative dating for archaeologists. By understanding trends and patterns in artistic choices of indigenous groups, you can have a better understanding of how old a site is, even when no datable material is found.

In the Museum just a few blocks from our hotel, there’s a vast collection of complete ceramic  vessels, many covered with art and effigies of animals, deities, and portraits of individuals. By  looking at what the Nicoya chose to portray, we can infer what they found important and what  ideas they may have valued.

A personal favorite in the collection was one collection of large pots, similar in shape to a pregnant womb. Carved on the front are recipes in the form of art, describing the ingredients needed to make the cacao within the pots. They even were used for burials, perhaps for the cooks of the society.”—Philip Hutton 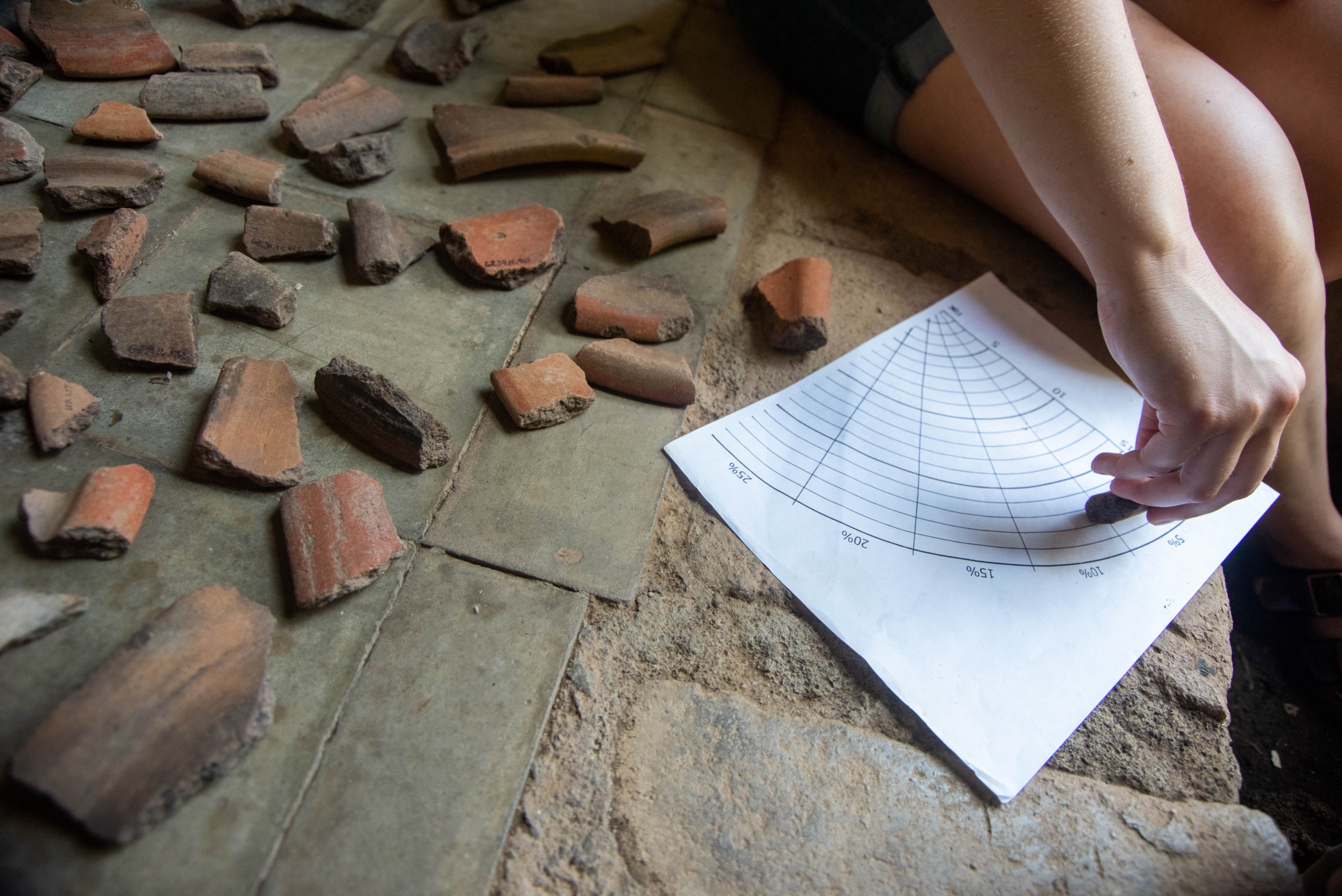 At Mi Museo, students were given bags of sorted pottery to learn how to determine the diameter and percentage of a rim.

“We visited Mi Museo in Granada, and we learned how to use sherd rims to help estimate the size of  the whole pot. By looking at the curvature of the rim, we can estimate the entire rim’s diameter  and the percentage of the whole

rim represented by the fragment. Later, we learned about the abbreviation of different Nicaraguan animals reflected in the design of the pottery from the Bagaces Period to the Sapoá period. What this means is that in the earlier period, animals were represented in the shape and decoration of the pottery. Later, we find that animals are only reflected in the design.  I wonder why abbreviation occurs— is it because these pots were mass produced, thus eliminating the time to shape and mold the pottery? I look forward to studying this more closely!”—Anna Brown 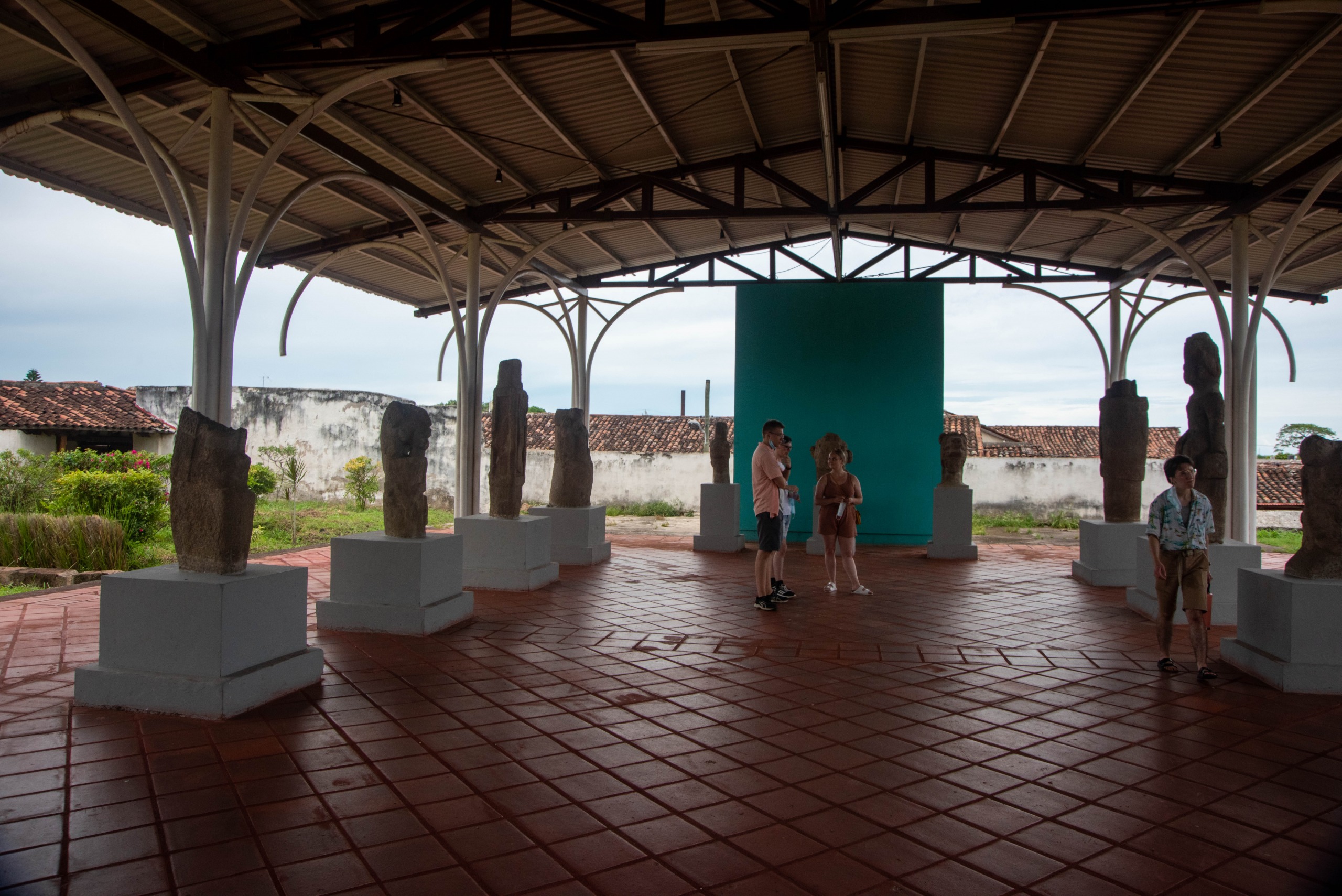 At the Centro Cultural Museo Convento San Francisco, students saw the statues excavated from Isla Zapatera and many other things that ultimately gave students a more extensive understanding of Nicaragua. William Robison expressed how this was important as he prepares to spend a month in the country.

“CCMCSF was full of informative displays; not only did the museum show displays of modern day religious and political events, it also gave context and life to the material remains of pre-Columbian Nicaragua. Taking a grand tour of the museum gave me a sense of awe and  amazement that a country so small (with respect to some of its more northern neighbors) could  be so full of not only history, but rich myths and ceremonies. Even though this museum shows  only a portion of the wider tapestry of Nicaraguan identity, it does not lessen the quality of the  perspectives it gave me. I will most certainly use what the museum taught me to both inform  my archaeological interpretati

ons, and augment my historical knowledge of the country I’ve  come to love.” —William Robison

These students offered their reactions to what we have been exposed to thus far, and the whole team will be more active as we get in the dirt at El Rayo.